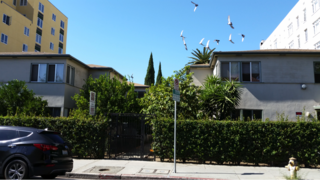 On Tuesday, October 18, the Hollywood Hills West Neighborhood Council (HHWNC) unanimously opposed the proposed demolition of 1719 –1731 Whitely Avenue, Los Angeles, CA 90028. The project has stirred up the community since March 2016 and has been debated numerous times at Neighborhood Council committee meetings.

The project proposes demolition of 40 rent stabilized units for construction of a 10-story Hotel including 156 rooms, 122 parking spaces and 16 bicycle parking spaces.

150 tenants of the existing 6 apartment buildings would be evicted.

The Neighborhood Council further recommended that the Department of City Planning order the property owner to prepare a draft Environmental Impact Report to address alternatives based on Richard Adkins’, President of Hollywood Heritage, letter of September 9, 2017.  Hollywood Heritage strongly opposes the demolition and requests the Community Redevelopment Agency prepare a revised historical survey to analyze whether the buildings are a part of a larger multi-family historical district, and alternatives to demolition.

At HHWNC meetings, Housing Committee on March 14, 2016, and the Planning & Lane Use Committee Meeting on July 6, 2017, tenants living in the Whitley Apartments expressed their concerns about the proposed demolition of their homes. They reiterated the lack of affordable housing in Hollywood, requested an eviction timeline, and asked whether the owner had “another apartment where they might be able to relocate.”

At tonight’s meeting a discussion preceded the calling of the vote: Among the speakers Oren Katz, HHWNC board member, noted Los Angeles Homeless Service Authority’s (LAHSA) statistics derived from the 2017 homeless count, saying that there is a high risk of displaced tenants becoming homeless, an increasing trend in Los Angeles County, due to a lack of affordable housing. He advised we must guard against demolition of the housing we have.

PLUM committee member, Luminita Roman reviewed that the owner for the Whitley Apartments had not been present at any of the four noticed committee meetings regarding this project. “How can we trust someone who has never shown up,” she stressed.

Vice-President of HHWNC Orrin Feldman acknowledged that Mathew Hayden, owner’s representative, had presented at various Neighborhood Council committees on four separate occasions prior to this meeting; but, “Hayden had no compromise to offer the tenants,” said Feldman.

Hayden again was present at the October 18 meeting, made a few general comments, but did not show project renderings nor did he enter into a discussion. It was as if everything had already been said.  However, he reported that the proposed project was under review in City Planning.  “Why should tenants be notified of something that’s yet uncertain,” he summed up.

Susan Hunter, a Hollywood resident, and representative of the Los Angeles Tenants Union, spoke on behalf of the Hollywood Chapter.  Hunter said, “I live in a thoughtless city that has now placed an importance on land speculation over human life and human value.” The city refuses to acknowledge the cumulative impacts on human life of its current “massive amount of development” and the cost that is being forced on Hollywood, she said.

“We’re constantly reminded that we’re no longer valued over the land speculation that’s happening [in Hollywood],” Hunter emphasized. “Human value is based on income. We have lost our perspective and what it means to live in Hollywood: Lost the reason why this was such a great neighborhood,” she continued.

“For who are we developing?  Not for the local working-class residents. I could walk to the Japan House [proposed restaurant], but I could not afford to go in there.”

Hunter urged the HHWNC to set a precedent, to put thought back into planning and land use, to prioritize the residents and merchants who live in Hollywood and collectively make it an amazing neighborhood, and finally, to no longer value property higher than the human lives that we’re forcing out into our streets.

Yeghig Keshishian, Department of City Planning Chief External Affairs Officer, wrote in an email that the 1719 Whitely site is zoned [Q]R5-2 which is reserved for high density residential uses.  The Q condition allows for the construction of a hotel on the site without the need for a Conditional Use Permit.

Anna Ortega-- Director of Enforcement Operations, Rent Stabilization Division, Los Angeles Housing Community and Investment Department (HCIDLA) explained that at the time when a property owner applies for a demolition permit, the Department of Building and Safety refers the owner to HCIDLA to provide them with tenants’ information. “Applicant cannot get a clearance on the demolition permit from DBS until housing verifies that landlord has filed the required paper work regarding the eviction of tenants.”

Tenants are entitled to at least 120 days notification of eviction, relocation funds, and counseling services to assist in finding housing with a minimum of four months to a year, explained Ortega.