As anyone who's lived here for more than 3 months knows, tamales in Los Angeles are as common as actors answering casting calls at Paramount Studios. You can't say you've eaten Mexican food in Los Angeles without eating a tamale. True Angeleno hipsters call it by it's Spanish name: "tamal", which itself came from Nahuatl, the Aztec language that also gave us such delicious foods as cocoa, tomato and avocado, all part of the Mexican and Latino food scene in Los Angeles. But, you don't have to be a hipster to enjoy the seemingly endless varieties of tamales now for sale at your local Mexican restaurant, Trader Joe's, Whole Foods or Bristol Farms, or the way hipsters in Echo Park, Boyle Heights, and Silver Lake eat them: from men and women who sell them on street corners, piping hot, from Igloo coolers. 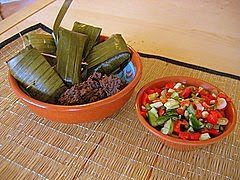 MrLA grew up with tamales being only corn patties with chunks of braised pork in red chili sauce, pork in green chili sauce, and greasy (forgive me, Grandma!) sweet tamales studded with raisins, cinnamon, peanuts and sugar, all wrapped up in corn husks and steamed for hours. Pork tamales were the only ones served in restaurants when I was growing up, back in the Jurassic Era of the 1960's and 1970's. They were all covered in red chili sauce (Las Palmas Chili Sauce, which you can still find in L. A. supermarkets), and shredded cheddar cheese. This is what passed for good tamales when I was growing up. It's a wonder I grew up at all with those "artificial" tamales.

Sarah Palin and the Tea Partiers (I should get a royalty check for giving some new musicians to LA the name for their band, after they answer casting calls at Paramount and live off of tamales until they crack the Big Time) would yell and tell me otherwise, but the GREAT LATINO IMMIGRATION WAVE of the 1980's brought real and varied and creative tamales to Los Angeles.

Just for starters: tamales were not just Mexican anymore. With the refugees from Guatemala, El Salvador and Nicaragua came fat pillows of corn patties made with chicken, seafood, beef, blended with sliced green olives? capers? bell peppers? chunks of potatoes? and, most shocking of all, wrapped in banana leaves and tied in string? You betcha, as Sarah and some of her Tea Partiers would say. Add to that the immigrants from smaller though consistent streams of Colombian, Ecuadoran, Peruvian, Chilean, Cuban, Honduran, and Argentinian immigrants to Los Angeles and you had the beginning of the endless "tamale wars" amongst LAtinos. They may have fought amongst each other and put down their "competitors' " tamales but all Angelenos benefitted from the "fight". Now you had seafood tamales, cheese and green chili tamales, vegetable tamales, pureed raspberry and goat cheese tamales, and for the very vegan in the city (and one of my two favorite tamales): green corn tamales, served Salvadoran-style, with pureed refried beans and Salvadoran rice. By 1985, an Angeleno could walk a 10-block square of Hollywood and eat his or her way across 10 Latin American countries just by eating tamales. Yummmmmmmmmmmmmmmmmmmmmmmmmmmmmmmmmmmmm!

Tamales became a Bel-Air sensation thanks to the nannies and gardeners that care for the Bel-Aireans' homes. The damas of the multimillion-dollar casas loved the taste, wrappings, and stories of their nannies and gardeners pasting and wrapping hundreds of tamales with their families, assembly-line like, at Christmas. Before you could say "Montana Avenue", Los Angeles Magazine, LA Weekly, and the Times were all publishing where to buy the best tamales and sharing tamale recipes. Tamale parties given by people whose ancestors ran away from the Czars of Russia, the grand dukes of Italy, and the sultans of Turkey were hosting tamale parties in Mandeville Canyon, Beverly Hills, and Tarzana as if they were Frida Kahlo's grandmothers. Along with the burrito, cheeseburger, and Dodger dog, the tamale (and the parties to make them) became as Angeleno as I am.

Owing to the overwhelming numbers of Mexicans living in Los Angeles, the city has seen the richness, creativity, and profusion of the thousands of varieties of tamales found in Mexico. Koreatown in December would be unthinkable without tamales de mole at Guelaguetza, a chain of restaurants serving the foods of Oaxaca, Mexico. Lines that would make the Olympic Games green with envy are found on weekends and in December at Liliana's Tamales, Sandra and Lolita's, Mama's Hot Tamales Cafe or any of the street vendors selling tamales throughout the city. The Border Grill girls, Susan Feniger, and Mary Sue Milliken, made their empire based on tamales that no one had ever seen before, not even in Latin America :-). The greater, more recent immigration of southern Mexicans has brought an array of vegetarian tamales with pungent aromas, often seasoned with mole or sauces of various colors and spiciness. A tamale filled with huitlacoche, corn fungus that has the smokiness and texture of wild mushrooms, topped with a white cream sauce, garnished with sesame seeds is to know Heaven.

There have been tamale festivals in various parts of the city at different times in the last 10 years but they've all bowed out before the granddaddy (or is it el abuelito?) of all tamale festivals: the annual Tamale Festival held at  Olvera Street in the spring. There are literally dozens of vendors spread out of a half-mile square area selling from the most traditional to the most avant-garde. Goat cheese tamales? Beer batter tamales? Mango and green chili tamales? Go east, young man! Go east, young woman (or any man or woman) to Olvera Street and park with thousands of tamale fans, fiends, and Facebook friends, all savoring, enjoying, weirding out (sometimes), and eating L. A.'s very own snack: the tamale.

Happy Upcoming Holiday Season! Many Tamales To You!

Michelangelo is a Silver Lake institution, an Italian restaurant run by a Venezuelan family, in which the matriarch of the family immigrated to Venezuela as a child from Italy. Off the regular menu, if you ask her (Domenica), she prepares Venezuelan foods, especially hallacas, for sale. Each hallaca costs approximately $8.00 but worth it, a mini-meal in itself.