The Other Side piano bar and the Flying Leap Cafe: The History Behind Hyperion Public in Silver Lake. 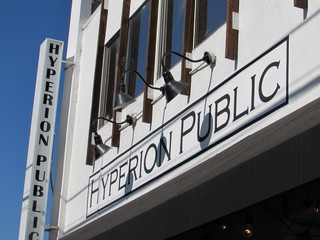 The building at 2538 Hyperion Avenue in Silver Lake has a very colorful history. According to tax assessor records, it was built in 1963,and is 4452 approximate square feet.

Formerly The Other Side piano bar upstairs, and the Flying Leap Café downstairs until June 2013, the businesses closed after 40 years. Longtime patrons told stories of police raids in the 60s ad 70s, and lamented that it was one of the few gay bars left in the neighborhood and now it was closing.

That was when John Speaks, a married father with four children, and his business partners took over and opened Hyperion Public. Speaks describes himself as the "socialite" of the trio. Akida Mashaka, an attorney, oversees the legal business affairs of the business, and Paddy Aubrey oversees the menu, production, and quality of the food. Speaks says he first came to Los Angeles in 1989 after graduating from Boston's Emerson College. He says he has lived in the area ever since. With various roommates, he lived on Talmadge Ave, Effie Street, among them. "When you're young in Los Angeles, you do whatever you can to survive."

He also stressed that diversity and inclusion of everyone is very important in his business. Being African-American, he recalled riding his bike through certain neighborhoods in Boston, where he was called racial epithets. "I even got a T.V thrown at me."

The business has also been used as a filming location, where commercials for Samsung and Miller Lite have been shot. Speaks says the film crews have to go through the whole permitting process.

There were changes made when the three business owners took over. The piano in the bar was taking up space and "people were banging on it who shouldn't be banging on it." A jukebox was also removed because people complained there weren't  enough selections on it. A bar in the restaurant area was added as the plumbing was already there.

Speaks said the former patrons of "The Other Side still come in, and that most of his patrons generally range in age 24 to 64. The restaurant hosts a Sunday brunch, and the establishment's website describes the menu and hours of business. "I couldn't tell you what the main group  (of clientele) is. I'm everyone's uncle."